1) Scanning probe investigations of battery materials
​
Lithium ion batteries (LIBs) are a commercially successful portable technology widely used in the  electronics and automotive industries. In order to improve the capacity and charge/discharge rates of LIBs, new anode and cathode materials are being developed. However, these materials are typically screened for advantageous properties through assembly into a working battery. This involves the fabrication of a film from a mixture of conductive material (e.g. carbon), a binder (e.g. polyvinylidene fluoride), and the active material of interest. How the film is cast, the ratio of the individual components of the film, the drying procedure for the film and the final assembly of the coin cell can significantly alter the performance of the battery. In order to avoid misleading information about the effectiveness of a novel active material many coin cells are required to validate findings. Instead, scanning probe techniques can be used to prevent the complication due to fabrication process of coin cell batteries.

In particular, our work uses upon scanning electrochemical microscopy and scanning droplet techniques to investigate these materials. Scanning droplet techniques utilise a pulled capillary to deliver solution to a dry sample. We use capillaries pulled to a micron diameter aperture to deliver solution to the substrate. The capillary is filled with electrolyte solution and a reference-counter electrode. The capillary is approached towards the substrate whilst a bias potential is applied between the surfaces. When the meniscus protruding from the end of the capillary contacts the substrate an electrical circuit is formed, this creates a spike in current which pauses the approach. The capillary is held in place whilst electrochemical measurements are performed. Once measurements are complete the pipet is retracted from the surface and repositioned. This technique allows multiple measurements to be made on a single sample, and could be applied to localised measurements on active battery materials. Development of this technique within a controlled atmosphere will provide opportunities to electrochemically investigate microscopic features on air sensitive materials. 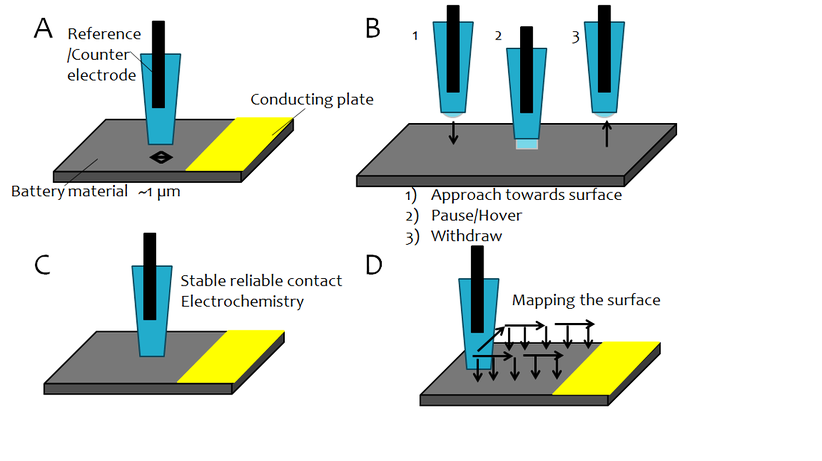 Recently, we have integrated a scanning electrochemical microscopy system within an Argon atmosphere glovebox and a standard procedure for the fabrication of an Aluminium/Lithium alloy reference electrode has been created. In primary studies, the system optimized using Lithium iron phosphate (LFP) particles and a lithium electrolyte solution in organic carbonate solvents (5 mM LiClO4 in propylene carbonate (PC)). In addition, we have shown that this method can be used to study single particles and determine their lithiation/delithiation properties without the additional complications arising from the presence of binders and electronically conductive fillers. Recently, we started studying the stability of different electrolytes and also moving toward testing other active materials.
2) Investigation of dual-layer batteries
​
Blended active materials for lithium-ion battery positive electrodes have been heavily investigated for their ability to combine high energy density and high power density materials together in a single cell. Although blended materials have many beneficial aspects, other physical arrangements of multi-material positive electrodes (MMPE) are being studied. One such arrangement is to layer one material atop the other, which was a conformation that was found to have disappointing performance in terms of capacity.

We are taking a second look at layered MMPEs and have found that they are in fact tunable in many ways blended electrodes are not. The layered MMPEs can have better control of the porosity and tortuosity of the high power density material allowing better diffusion of lithium ions when high currents are drawn while also allowing for a denser high energy density layer for sustained energy requirements. The placement of the high power density layer will also impact performance, which is an aspect which we are currently studying.
Recent group publications
2. Dayeh, M.; Ghavidel, M.; Mauzeroll, J.; Schougaard, S. Micropipette Contact Method to Investigate High‐Energy Cathode Materials by using an Ionic Liquid. ChemElectroChem 2018, 6(1), 195-201.